A backstage guide to the people and games.

Over the years I’m Sorry I Haven’t A Clue has featured many different games, from one off visual spectaculars to firm favorites, returning series after series.
These include:

Chat Up Lines: how to make special friends.

Complete Quotes: how famous quotations ought to end.

DIY drama: the players improvise a TV drama providing their own sound effects.

In Their Own Words: the teams guess the missing sections from a day in the life of a well-known celebrity.

Jargon: what the ‘experts’ really mean.

Karaoke-Cokey: the audience serenades the teams, who must guess why.

Late Arrivals: the teams announce the unlikely names of the late arrivals at a special-interest group ball.

Misleading Advice: advice it is best not to take.

Missed Hits: shows that, for some reason, never quite made it.

Notes and Queries: the teams provide the answers to everything you ever wanted to know.

One Song To The Tune Of Another: a complicated concept that requires
some explanation.

Pick-up Song: the players sing along to tracks they can’t hear.

Quiz of Quizzes: the teams take the best elements of all the popular Quiz Shows and discard them.

Sound Charades: charades without the benefit of mime.

Sound Effects storytime: one team tells a story while the other team bring it to life with sound effects.

Stars In Their Ears: the players impersonate Stars as they sing
unsuitable melodies.

Swankers: the teams attempt to out-do each other’s boasts.

Word For Word: in which one team exchanges a series of words while the opposing team challenges if they detect a connection between any of these words.

The regular panellists for the show were Graeme Garden Barry Cryer and the late Willie Rushton and Tim Brooke Taylor. They have been joined over the years by numerous guest panellists, including:

In addition to guest panelists, the show has featured appearances from Dame Judi Dench, Sir Michael Gambon and Alan Titchmarsh, as well as the late Raymond Baxter as a one-time commentator on a round of Mornington Crescent.

Over the years the show has also benefited from contributions by a prolific letter writer, Mrs Trellis of North Wales.

Behind the scenes, the show has involved a number of different producers:

Iain Pattinson was the programme consultant from 1991 to 2020, and the show has featured written contributions from Peter Bradshaw, Debbie Barham (possibly add names of recent script contributors) and Steve Punt. Since Iain’s death in 2021 Robert Fraser Steele has been programme consultant, providing the chairman’s script.

Musical accompaniment is the backbone of many of the games. Before Colin Sell took over the role early episodes were accompanied by I’m Sorry I’ll Read That Again pianist Dave Lee. Other pianists to have performed on the show include Neil Innes, Denis King, David Firman and Matthew Scott.

The lovely Samantha has been the show’s favourite scorer since 1985, aided at times by Sven, from Sweden and the lovely Monica. 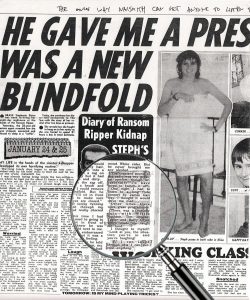 Kidnap victim Stephanie Slater explains how the show made her laugh, even when she was imprisoned in a coffin. 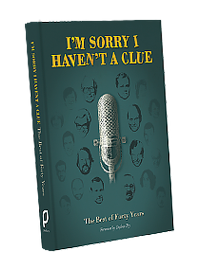